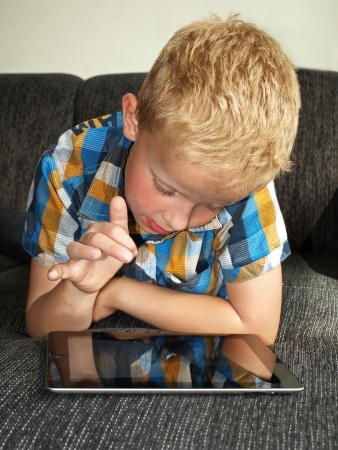 Children’s toys did not appear in the market until the 19th century. Prior to factory-made toys, kids were playing with homemade toys and anything they could find in the woods.

Interestingly in the article written by BBC it said, “In many homes, children were not allowed toys on Sundays – except Noah’s Ark because that was in the Bible.”.

Through the years the toy world added more things into the market. Kids have options. Toys became affordable and everyone- poor or rich have plenty of toys to purchase at different price points.

Time has changed since then….

Instead of playing toy cars or Barbie alone, toy companies started introducing toys that were battery operated- with light, sound and some even talk back to your kids. Toys from LeapFrog and vTech were some of those toys. Then there were the Gameboy, Wii and Xbox.

Some of these little kid devices even come with WiFi like this vTech device below (photo taken from Amazon). 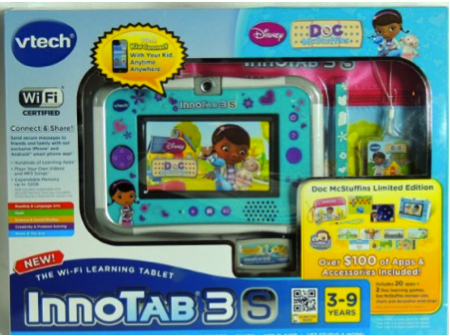 Now there is another revolution…the world of tablets like Kindle and iPad.

I am looking at a Kindle Fire for Joshie, after seeing my friends kindles for their kids. They had screen time monitors, and different activities and even some movies on there. I don’t need the latest and greatest, but does anyone have any comments on their Kindles for their kids?

What are the truths about kids using electronic devices?

I like the answers given by intouchtablets. Children love to touch things! A touch screen in tablets give children the ‘action-reaction’ that creates anticipation and keeps them interested. It also helps developing hand-eye coordination. (Source: intouchtablets)

Another angle to look at is to treat tablets (iPad and Kindle) just like another toy. It should not replace traditional toys like puzzles, Legos, crayons and colored pencils.

I believe there are many educational games and entertainment programs in the tablets but it should not be the only toy a child has. Children still need to touch a physical shape and texture of toys, hear the sound made by physical drums or the softness of a stuffed animal.

In my opinion, all things in moderation. Harley has been computer savvy since 3. Every teacher he’s ever had has said that he is the smartest in their class. He’s always had his time restricted and it can be a good time management tool in these busy times.

I never had to really punish him for anything, just restrict computer time when his behavior got out of hand. By the same token, Mary, I know this doesn’t apply to you and Josh with such a young age but my sister who works in the high school has said how detrimental she thinks “game mentality” is.

Games always have a way to win, sometimes many, children learn that there is a way to win and winning becomes more important than cooperation or compassion. Kids learn that if they go around this or through that or try something different they will find a way to win. Also my son has asked to go to friend’s houses to play their Wii or whatever the game system is and he’s played things that other parents allow that I don’t, no guns, no violence, etc. By the same token, we live in a world where cyberspace has great presence, lets face it, we’re all here, right?

Leaving kids illiterate of this realm can be crippling moving forward with the rest of the world. Harley loves his Kindle since last Christmas, you can set up time frames for kids easily. If you choose that I would recommend getting a power charger for it, charging can take a long time.

According to recent national survey, 50% of American kids spend four hours or more per day on computers and electronic devices.

The CHLA.org reported that Dr. Mark Borchert from the Children’s Hospital Los Angeles believes that children can develop blurred vision, headaches and other problems when focusing too long on one object, such as a computer screen and those long video game sessions will not permanently damage a child’s eye.

However extensive use of electronic devices will reduce social interactions or less time doing homework.

I recommend an article written in Bits New York Times, The Child, the Tablet and the Developing Mind. The article talks about kids using tablets at the dinner table and how parents use electronic devices to keep their children quiet while dining out. Is it wrong? And the next question sets me thinking:

So will a child who plays with crayons at dinner rather than a coloring application on an iPad be a more socialized person?

Also read Matt Peckham article “Should toddlers use tablets and smartphones after all?” on Time Magazine Tech online section.

Quoting the article:
New research suggests that using screens may in fact yield slight benefits to very young children when it comes to learning.

Whether we like it or not, technology is here to stay. Our society has changed and just like the toys that have evolved since the 19th century, these toys called Kindle Fire, Nooks, Samsung tablet or iPad are now available for purchase and use. If used wisely and correctly I think these are toys that I may have to look into for my children’s education and development.

Since last year, school districts in Florida, Michigan and Alabama are requiring students to take at least one online course to graduate. The online world and the use of electronic devices are necessary for work, business and every day living.

Oscar Wilde said “Everything in moderation, including moderation.”