You are here: Home / Home Based Business / Truth and Lies About Money

Last night I interviewed a couple who would like to partner with us in business. This couple reminded me of where Jay and I were just 7 years ago. A few minutes into the conversation we realized they were DESPERATE to make their home business work just like we were years ago. Why? Because they were literally drowning in debt and were robbed of quality time and freedom in their lives. They were slaves to a JOB and working. Like us they felt they had no choice but to do what they were doing all along just becoming more and more DESPERATE to find a way out of the pit of poverty.

On the outside Desperate Diane and David (we will call them) are living the American Dream. Living in a great neighborhood, in a beautiful $200,000 home, their kids are going to the best schools, and David the main earner in the family has a DREAM JOB earning over 6 figures a year. But look a little closer and you will find so much stress, tension and despair. David commutes 2 hours a day and most nights doesn’t get home until after 8 pm. His health has suffered and recently he had a minor car accident because he fell asleep at the wheel coming home from work.

Diane is an amazing wife and mother who cares for their home and family mostly by herself. She works a seasonal job earning an extra $2000 a month. She will work 30 hours a week during the kids’ school time and sleep time. She loves the work but it’s grueling as she sacrifices her sleep and sanity. This is what she said about the extra weekly paycheck she gets during her seasonal job. “Its like a million dollars to us. It gives us room to breathe a little and takes the stress off of our finances and keeps us from using our credit cards for groceries and day to day expenses.” Do you know that feeling?  Do you know what it’s like to have to use your credit card to pay for day to day expenses?

They have $25,000 dollars in credit card debt, plus they have Student Loans, Car Loans, Medical Debt, and a Mortgage. Even though they earn great money they spend everything and then some every month. WHY? Because they are in POVERTY. See Poverty isn’t just for those earning under the Poverty Line. It’s a label for anyone who uses all the money they earn every month.

Is that blowing your brain? Maybe you are thinking how can you call me poor, I earn more than $60,000 a year. I can call you poor if you are spending all the money you earn in a year and then some.

Let me share our story of poverty with you.

This past year our home business parent company gave my husband and I a surprise letter at our company convention to be backstage at a certain time for a HISTORICAL AWARD. We thought simply it was because we had been in the company for 15 plus years and they were awarding us a longevity award. As we took the stage with more than 25 other leaders from our company the MC explained that every member who was on stage was part of an elite group who have earned 1 MILLION DOLLARS or more in the company. My husband and I looked at each other and our hearts sank, we turned a few shades of pale and immediately got sick to our stomachs… WHY???? Because simply we had earned over 1 million dollars and SPENT over 1 million dollars… AGGGGHHHHHHHHHHH! We had no significant savings, do not own a home, don’t own our vehicles yet, and still have over $100,000 in Student Loan Debt.

So what is the difference between Desperate Diane and David and my husband and I… ONE THING. See in 2008 Jay and I became serious about digging out of the Pit of Despair. We got a hold of a Training Program that gave us a plan to get back on track.  We worked that plan really well for 3 years and paid off more than $150,000 in debt before we started to slack again. I can give you a list of excuses why we became lazy again but that is all they are… EXCUSES.

Our household income went significantly up so there seemed to be less stress and our lives got busier when my husband started a new job and we started a family. So again we would spend all we made. We also started investing in some things without wise counsel, which took more than $100,000.

Although it set us back some we still have been able to pay off $280,000 in 6 years and 8 months. WOW, right? Some people would be totally out of debt if they had just stuck to the plan, but sadly we made more debt because we made more money. It’s such a slippery slope you can fall down when you have the paycheck or in our case a commission check that comes every month. It’s dangerous unless you have the skills to handle money correctly.

So during our interview with Desperate Diane and David we told them that most people with that much financial stress in their lives don’t usually find significant success in their own home business right away unless they get their money management and debt under control first. We also have made it a requirement for our new team members and staff to take this Financial Program. 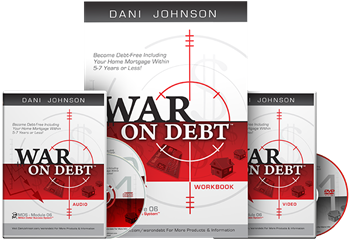 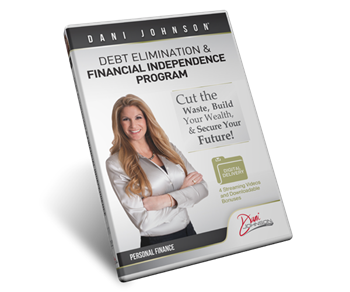 The greatest feeling in the world is paying off your debt and getting out of bondage. It’s amazing to watch our team members and staff create a new happiness and lightness to their lives. They are happier, healthier, and are way less stressed. THEY ARE BETTER Employees, Business Developers, Parents, Spouses, Friends and People.

WAR ON DEBT and DEBT ELIMINATION AND FINANCIAL INDEPENDENCE